To print the Standard Fuel Variance report, do the following:

The top section of the Standard Fuel Variance report compares the difference in the meter readings to the amount of fuel posted. The left column is the current data, which may represent one day or a week depending on how often meter and stick readings are updated. The right column is the monthly variance information; it is reset when the end of period for vehicles is processed (SEV). The bottom section is the tank summary, which shows the variance in gallons and dollars between the computed inventory and the actual inventory. The monthly stick difference accumulates until end of period is processed. The yearly stick difference accumulates until end of year is processed.

The Daily Fuel Variance report is broken into three sections for each tank on file: the daily pump information, the daily tank information, and the monthly tank information. The daily pump information compares the starting and ending pump meter readings to come up with the fuel usage. The fuel usage is then multiplied by the price per gallon (from the tank record) to come up with the usage cost.
The daily tank information takes the previous and current stick readings and tank deliveries to calculate the flow-thru fuel. That number is then compared to the pumped fuel (derived from the fuel usage in the daily pump section) to come up with the daily loss or gain. Ideally, the flow-thru fuel and the pumped fuel should be equal; realistically, these two numbers will vary slightly but should be close. The daily sections are zeroed out each time the variance report is rolled so the process can be repeated the following day. The monthly tank total section, however, accumulates the monthly totals until the end of period processing for vehicles is performed (SEV).
The monthly tank totals compares the fuel pumped to the flow-thru to come up with the monthly gain or loss which is then compared to the allowable loss or gain (from the tank record). If the loss is within the acceptable limit, YES appears in the compliance column. The allowable loss or gain is determined from the figures in the tank record and the monthly flow-thru as follows:
Allowable Variance Qty + (Monthly Flow-Thru x Allowable Variance Percentage)
To print the Daily Fuel Variance report, do the following:

Two options are available for adjusting fuel variances. As with all adjustment options in RTA, it's best to post adjusting entries, whenever possible, where the problems occurred so there is an audit trail. However, sometimes it's necessary to make changes directly to pump or tank variances using the two options available. 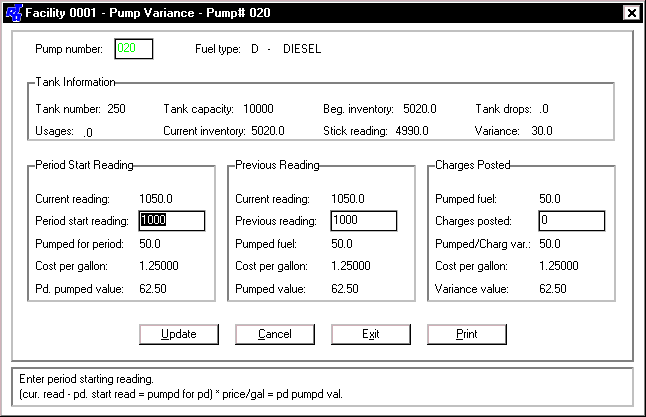 The information displayed through this option is divided into four sections: 1) tank information, 2) pump usage for the period, 3) current pump usage, and 4) current variance between the pumped fuel (meter based) and the charges posted to the pumps (based on fuel tickets). The average cost per gallon comes from the tank record for this pump. To display and adjust a variance for a single pump, do the following:

A Fuel Variance report can be generated for the displayed pump and tank by choosing Print.

A stick variance is calculated each time a new stick reading is entered. The variance is the difference between the stick reading and the computed tank inventory. The computed tank inventory is based on the following formula:
Beginning inventory + Tank deliveries – Tank usages
This is the number of gallons that should actually be in the tank if all conditions were perfect. It doesn't take into account some of the common problems when dealing with tanks: evaporation, condensation, expansion, contraction, leakage, and theft. The stick reading, on the other hand, gives you a close approximation of the number of gallons of fuel in the tank, and it does address these items. The monthly and yearly stick difference reported on the Fuel Variance report can be used as a guideline in determining if a problem exists in these areas. If adjustments are needed for the stick differences, do the following: